Winter 20/21 is the first edition of the Tiny Notts Chess Journal and is a dozen or so pages of chess news coverage, stories, and diving into games from amateurs and grandmasters. It’s strongly inspired by the iconic aesthetics of Chess Review which you may have seen be surreptitiously acquired by Elizabeth Harmon in her television series. This zine is a small home to a collection of writers including a WGM, who we’re very proud to be hosting.

Hello, I’m Shane, a novice chess player, novice magazine layout designer, and novice writer who decided to try out all three at once to make this publication.

Chess. I’ve only begun playing chess in the past year or so and have found it a fantastic way to keep in touch with friends. Not to mention, keeping myself away from video games which I’ve found to be all consuming, with not much out of it on the other end sometimes. Chess, at least, feels like a skill I’m getting better at over time. The play of it isn’t the only interesting part of chess though. It has a fascinating community and history alongside it. I hope I’ve caught a bit of that here.

Magazine layout design. I love magazines as a medium and not just for the content. There’s a high level of creativity needed in the positioning and flow of all the elements of an article. Unfortunately, I’m not known for my creative eye so I mostly look on at these in awe (and a touch of frustrated jealousy). After spotting Chess Review, with its largely black and white tone, big blocks of text, yet still visually appealing, I figured I’d attempt to emulate it. This is my first time in a publishing application (Affinity Publisher) and I’ve had a blast with it. (Oh boy, have I made some mistakes though.)

Writing. As much as I love working on a story – fictional or not – I’ve never intended anyone else to read them. There’s a barrier to improvement that comes along with that safety though, and so I decided to write about something that I hope people would like to read. As I'm not trying to write a world famous chess review, I've been able to have a bit of fun - please take whatever you read as good humoured. (I am a little nervous about upsetting Magnus.)

None of these elements are perfect in this zine – one of the benefits of the format is the generous allowance when it comes to quality. To be honest, I should say that my aim with this zine was just to finish it. Finishing a thing is another skill I’ve not yet mastered, but have finally done so here. I hope more will follow, with improvements all around, though maybe not focused on chess. But we’ll see.

Feel free to skip the donation and nab the zine for free, if you like. (Though, you should know that it wasn’t free to put together.) The suggested price is £1. This is higher than the 85p I wanted to set it to (as Chess Review cost 85c for some time) but it seems itch.io demands at least a pound. Sorry about that.

If you’d like to read this the way it’s intended, you can print it on A4 paper, landscape, with 2 pages per page. Hopefully, you can find a setting called “Booklet” somewhere. This will print the first and last pages together, etc, allowing you to simply fold it together.

Unfortunately, even I’ve struggled with getting my printer to do as it’s told, so I can’t give very good instructions. 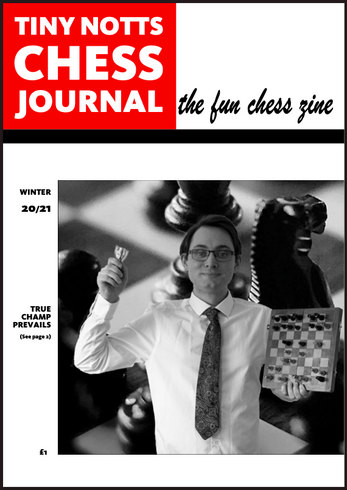 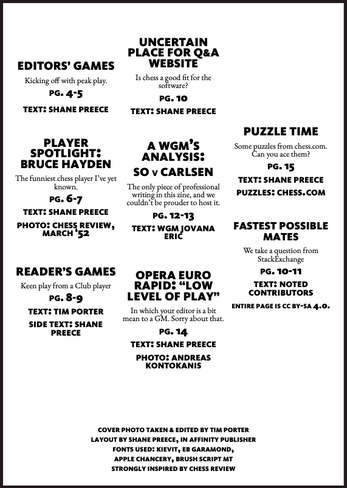 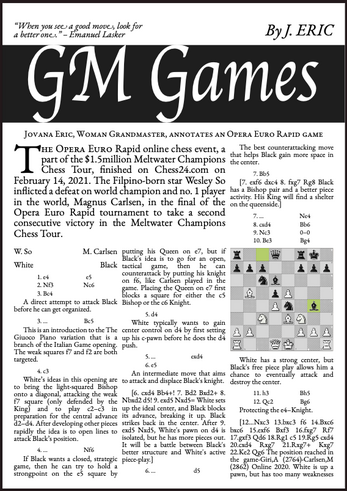